Angel has extensive experience both as a player and coach and, most of all, aims to inspire others to love the game. The SCC Rugby Academy Touch section was delighted to begin working with her in September 2017.

She was also a Rugby 7s silver medalist in the Southeast Asian Games 2015 held in Singapore.

While Angel now focuses on coaching she still plays for local clubs in both Touch and Contact rugby in the local league.

Angel has a wealth of experience working with young people in both touch and junior rugby across all age groups and gender. Her first role was actually coaching Touch Football and in 2003 she completed a stint as the coach of National Junior College Touch Football Team. Angel also still works in local schools where she has recently coached the senior boys to 7th position out of 23 teams.

She strongly believes in teamwork, discipline and in providing a fun, engaging and safe environment to bring out the best in each player in terms of their skills and knowledge.

Touch is a unique game that provides for individual flair and yet demands a high level of synergy amongst all players as well as coaches.

Touch trains every Sunday morning during term time at the SCC Rugby Academy ground at Dempsey. 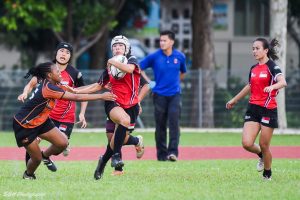 Angel is supported by a team of coaches who look forward to seeing you down at Dempsey.