Rugby in the Time of Covid

It’s been a strange few months on the rugby field where coaches and players have had to adapt to the new regulations that come with the ongoing pandemic.

Games and tournaments are of course off limits for the time being, but despite the restrictions training continues down at the Academy’s Dempsey ground on Saturday and Sunday mornings.

The Academy also has a new Director of Rugby, Brendan Nolan, who took over a few months ago after Richard Cook stood down after many years.

Despite being an unusual year for Brendan to take up the role in the midst of Covid-19 there’s still plenty to play for, “We have a fantastic rugby academy and I am looking forward to the challenge and helping to drive our academy further.”

So how has the Academy had to adapt?

At the start of the year it was a bit daunting looking ahead especially when we consider it’s only our 8th year and we have close to 600 players from around 90 schools across Singapore.

Thankfully we have a really strong team (Sarah, Clare, Su, Bryan, Henri & Tim) with support from the SCC Rugby Academy board – this enabled us to put plans into place, working closely with the JRCS, the Singapore Rugby Union and especially the Singapore Cricket Club.

Week on week we’ve demonstrated that we can bring so many kids down to our Dempsey ground safely and still have a great rugby experience. I am really proud of what has been achieved.

How has coaching changed?

Coaches have had to adapt and ask themselves how do I go from coaching a big group to just 4 or 5 kids in a pod. For the first month or so it wasn’t easy, but some of the overarching structure provided by our 3 head coaches created a good base to build upon.

In fact, there have been advantages of being concentrated in a small group. The focus has been on technique, the ability to spend time on core skills, high repetition and speed.

We have been restricted around contact but we have developed new techniques to compensate due to these restrictions.

The level of collaboration between age group coaches has been great, for example, coaches in the under 6s group recently became marshals and studied the under 7s — they’ve taken videos to learn what the other age groups are doing and shared that knowledge. This ongoing development of coaches is happening across a range of age groups.

Overall the level of passion & commitment from all of our coaches and volunteers has been amazing.

Where do you see the Academy going in the next year or so?

We’re always reviewing where the Academy has been and where it is going in the next 18-24 months. Of course, as an Academy it is always great to win games and lift some silverware at tournaments but that’s not the driver behind the Academy. It’s always about helping our boys and girls develop not just their rugby skills but how to grow into young men and women.

We’ve already done some fantastic work with our junior Scholarship Programme where we offer a young person the opportunity to play rugby who ordinarily wouldn’t have been exposed to the game or had that opening. We help them with kit and fees and watch them grow and understand the game. I’d love to build this further.

Year on year we continue to see more young females being introduced to the game and joining the academy and we continue to actively work with JRCS to help build women’s rugby in Singapore.

Our broader aspiration is for the SCC Rugby Academy to be a leading rugby academy across the Asia-Pacific region.

How long has rugby been part of your life?

My rugby journey started in Sydney when I was 4 years old and I was hooked on rugby from a very early age. I don’t think I’ve missed a season since.

I played junior rugby, Colts and 1st grade for Southern Districts Rugby Club in Sydney and was fortunate enough to play with and challenge myself against some of the best players in Australian rugby at that time. I then moved to the UK and played at Henley Rugby club for a while before moving on to Barnes Rugby Football Club – all of which were great rugby experiences.

I transferred to India with work and within a day of arriving I’d found a rugby club in Bangalore and from there I moved to Mumbai where I played for the famous Bombay Gymkhana Rugby Club. It’s actually an affiliate club of the Singapore Cricket Club and playing on the Maidan sports field in Mumbai was a privilege – a bit like playing on Singapore’s Padang with its historic surroundings.

Around eleven years ago I arrived in Singapore and within a week of landing I’d joined the SCC Rugby Section – based on recommendations from friends in India, UK and Singapore.

I became part of the SCC Rugby Academy the first week it began eight years ago and it was great to see players from the SCC rugby teams create an Academy for their kids and subsequently for other members.

I still play rugby but more socially these days, as my focus is more towards my two young boys to help create an environment where they can learn and develop skills for the game in a fun way building some great friendships at the same time. Hugo is very excited as he’s just resumed training with the under 5s and Baxter is in the under 7s.

Overall, I’ve had great experiences through rugby, both on and off the pitch. These experiences have helped shaped me and enabled me to allowed me to have some great memories and valued friendships all around the world.

Given my role within the Academy and as a custodian of the game, my aim is to create an environment that allows for positive fun experiences as our players develop skills, overcome challenges, meet goals and make friends. 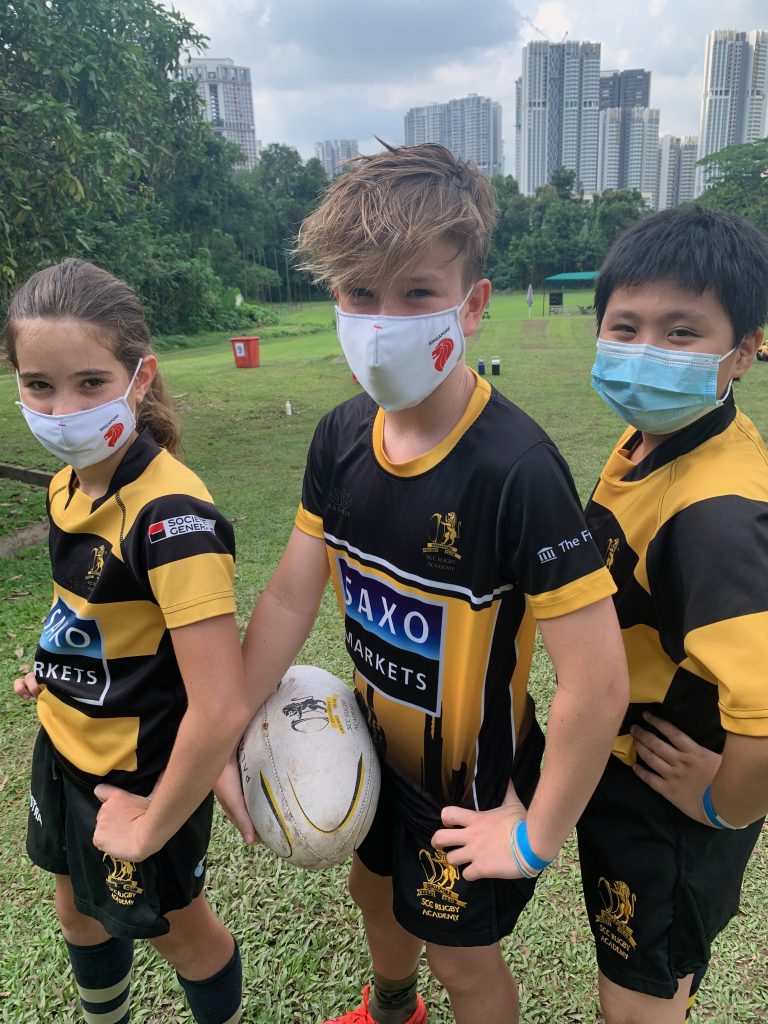 The SCC Rugby Academy is a not for profit junior rugby club which welcomes players from under 4s to under 19s for rugby and under 10s to under 16s for Touch. We train at SCC Dempsey ground on Saturday and Sunday mornings.  For more information please contact Sarah info@sccrugbyacademy.com